Rushworth is located 181 km north of Melbourne via the Hume Freeway and Goulburn Valley Highway.

There is something spectacular about Rushworth’s main street. It is so wide and so elegant with historic buildings on either side and a huge median strip. It must be one of the most impressive main streets in rural Victoria. Rushworth retains its original charm and is surrounded by interesting smaller goldrush towns.  Rushworth is known as ‘the Gold and Ironbark town’.

Rushworth’s gloriously wide and elegant High Street, which came into existence in 1853, was declared an Urban Conservation Area of Special Significance by the National Trust in 1982. Today the best thing any visitor can do is take a walk along the street and carefully read the ‘Walk Through Time’ Community Project plaques on many of the buildings. They offer a unique opportunity to experience what the street was like in the heyday of the goldrushes.

Some of the local attractions include: 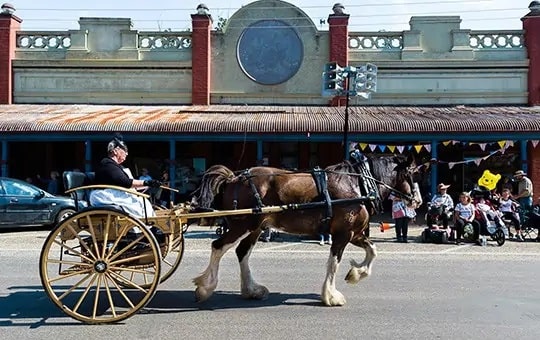 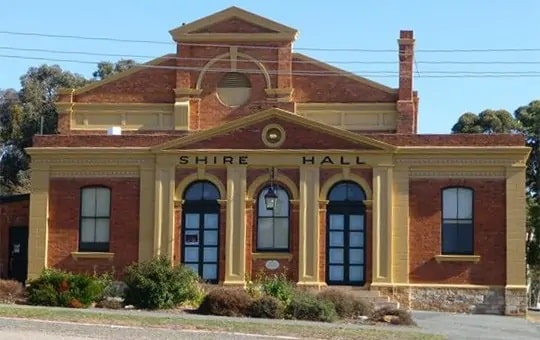 At the intersection of High and Parker Streets is the Rushworth Museum, located in the former Rushworth Mechanics Institute. The ‘Walk Through Time’ plaque explains that the building was constructed in 1913 to replace the original 1897 building. It was originally used as “a lending library for miners and tradesmen, the new institute also included a billiard’s room surrounded by a raised platform for spectators.” Today it is used by the Rushworth Historical Society and contains over 4000 items connected with local history.

Other nearby significant destinations include Whroo and the Waranga Basin.

Located 7 km south of Rushworth, along Whroo Rd, is Whroo Historic Reserve (500 ha within the 33,000ha Rushworth State Forest) now a ghost town and a reminder that once there was a bustling gold mining town which, at its peak in 1857, had a population of 2100 and 139 buildings. All that remains are wattles, wildflowers, peppercorn trees, wells, remnants of mines and grassy clearings. All the buildings have been removed.  Be sure to check out the Whroo cemetery…spooky!

The Whroo goldfield (the name probably comes from a local Aboriginal word ‘wooroo’ which meant either ‘mouth’ or ‘waterhole’) was discovered in 1853 in a gully near Balaclava Hill (named after the Battle of Balaclava in the Crimean War). The find was so rich it had 15-cm gold veins and yielded well over £1 million worth of gold. Visitors can peer into the 25-metre deep Balaclava open-cut mine on the hill although it should not be entered. South of the hill is the site of the mine owner’s homestead. Four large pine trees remain from his 4-acre garden. A row of sugar gums marks the site of a mechanics institute where balls were held on moonlit nights (owing to the lack of electricity) from 1859 to 1955. The Whroo Cemetery contains the graves of over 400 people and beside it is a signposted walking track that leads to an Aboriginal rock well.  Other relics include cyanide vats and a puddling machine.

Waranga Basin, located 8km north-east of Rushworth, was commenced in 1905 and completed in 1908 using picks, shovels and horse-drawn scoops. The water comes from the Goulburn Weir. It is a popular fishing destination. The main access road is the Tatura Rd. It takes you past the Waranga Western Channel which transports the water 180 km via gravity feed to the Mallee.